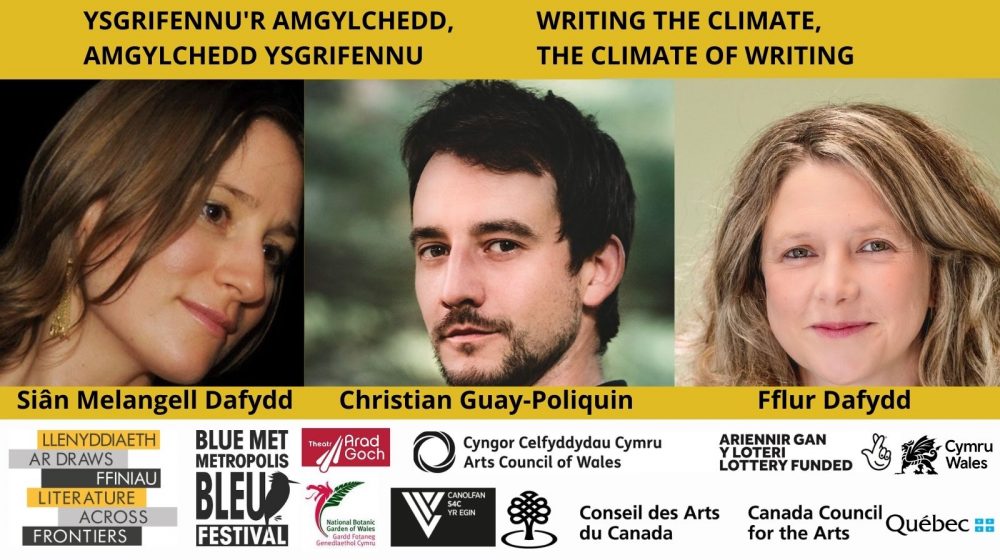 Writing the Climate, the Climate of Writing was a literary collaboration with the Metropolis Bleu Festival in Montreal that brought together the Quebecois novelist Christian Guay-Poliquin with the Welsh author and scriptwriter Fflur Dafydd in an exchange about our relationship with nature and its impact on the environment. Whether we tame nature by creating gardens, exploit it by growing food and breeding stock, or damage it with expansion of cities, industries and transport, we have reached a critical point when climate change calls for a radical rethinking of human interaction with nature.

The two authors were commissioned to write a text addressing these concerns and shared these with audiences during their joint appearances in Montreal and in Wales. Their readings of the texts was recorded for a podcast by Metropolis Bleu in when Fflur Dafydd participated in the festival in early May 2022.

Christian Guay-Poliquin then visited Wales in June 2022 and spent a week in Aberystwyth, Carmarthen and Cardiff, meeting audiences and local writers. In Aberystwyth he was in conversation with the Welsh-language novelist Siân Melangell Dafydd about writing in French in North America and about how of the language movement in Quebec has shaped culture in the province and the vibrant city of Montreal.

From Aberystwyth he travelled to Carmarthen where appeared with his counterpart Fflur Dafydd in a double bill: a brunch event at the digital and creative hub Canolfan S4C Yr Egin, where the two authors were  in conversation with Elin Haf Gruffydd Jones, and later a reading in the National Botanic Garden of Wales where they shared their texts written for the project. He  then spent a day in Cardiff concluding his short tour of Wales before travelling back to Montreal.

Writing the Climate, the Climate of Writing is produced by Literature Across Frontiers in partnership with Metropolis Bleu Festival, Canolfan SC4 Yr Egin and the National Botanic Garden of Wales, and supported by the Welsh Government and the Government of Quebec.