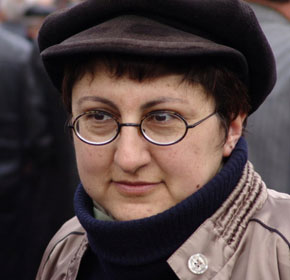 Marine Petrossian was born in 1960 in Yerevan. Her first poems were published in the literary magazine Garun in 1987, and her first collection of poems came out in 1993. It was translated into French by Swiss poet Vahé Godel and published in France. Her second book, At the Seashore of Armenia, established Petrossian’s unique documentary style. Her most recent book, Salad with Shots, was published in 2011.