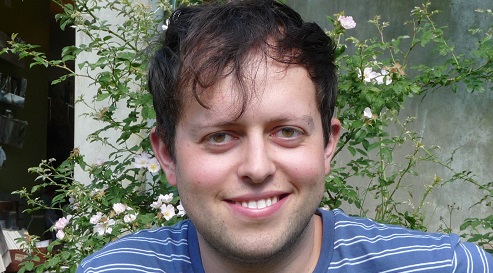 Llŷr Gwyn Lewis (1987) is a Welsh-language writer and poet. Born and raised in Caernarfon, North Wales, he studied at the universities of Cardiff and Oxford before completing a doctorate on the work of T.Gwynn Jones and W.B. Yeats. Following a period as a lecturer in Welsh at universities in Swansea and Cardiff, he now works as a resource editor at the Welsh Joint Education Committee. His first poetry collection, Storm ar Wyneb yr Haul (Storm on the Face of the Sun) was published in 2014. His first prose work, Rhyw Flodau Rhyfel (Some Flowers of War), won the Creative Non-Fiction category in the 2015 Wales Book of the Year award. He has published poetry, fiction and articles in Welsh-language periodicals including Ysgrifau Beirniadol, Poetry Wales, Taliesin and O’r Pedwar Gwynt.

Llŷr Gwyn Lewis was selected as one of Literary Europe Live‘s New Voices from Europe 2017.