(English) A strategy for literary exchange in the Euro-Mediterranean region 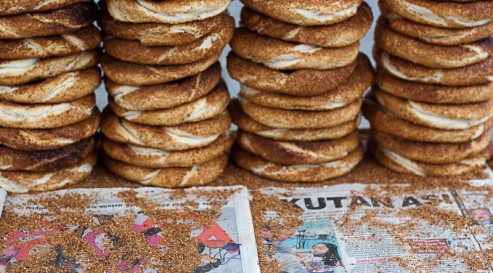 Literature Across Frontiers has a solid background and extensive experience in promoting literary exchange and translation in the Euro-Mediterranean region, as a way of encouraging intercultural dialogue between Europe and the South-East Mediterranean. LAF projects in this field have been carried out with a range of partners over the last decade, and have included co-organisation and development of several new literary festivals in the region, inclusion of authors from the South-East Mediterranean in European literary events, cooperation with book fairs in the region, poetry translation workshops, professional training seminars for publishers and translators, a book donation initiative, and developing and testing models for the recruitment and training of young literary translators from European languages into Arabic and Turkish.

A key element in LAF’s commitment to improving all aspects of translation and literary exchange in the region is the development of a clear strategy built on a foundation of extensive research and broad multilateral consultation. With this in mind, LAF has undertaken a number of specific activities over the last three years.
Becoming a partner in the Euro-Mediterranean Translation Programme (EMTP), an initiative of the Anna Lindh Foundation organised in cooperation with Literature Across Frontiers and Transeuropéennes in 2010-2012.
Convening a two-day international symposium on writing, publishing and translating in the minority languages of nations without their own state in the Euro-Med region, held in Istanbul in January 2011.
Convening the international conference ‘Literary Exchange and Translation in the Euro-Mediterranean Region: Challenges of the next decade,’ co-organised with the Turkish Ministry of Culture in Istanbul in May 2011.

Strategy consultation workshops
To take our crucial strategy consultation work forward, a LAF Euro-Med working group was established following the Istanbul conferences and a further series of three strategy workshops were planned. The first workshop was held in Beirut in July 2012 on the occasion of the inaugural Hay Beirut Festival, the second in Istanbul on the occasion of the Istanbul Tanpinar Literature Festival in October 2012, and the third and concluding workshop will be held in Valletta, Malta, on 5-7 April 2013.

The key aim of the first two strategy workshops has been to bring together literary actors from the Euro-Mediterranean region to discuss possibilities for future cooperation across the Mediterranean, and identify the obstacles literary exchange and translation faces. In addition to this, feedback on the original recommendations has been obtained, and areas for work identified. Perhaps most significantly real communication has been facilitated, new contacts formed, and future collaboration projects initiated between independent cultural associations, larger, more established literary festivals and venues, individuals and networks.

Recommendations for literary events and festivals in the Euro-Mediterranean region:
Anchor the network emerging from encounters such as these in the region and use social media to sustain it.
Map literary organisations and events in the region, as an online resource.
Organise exchange residencies and meetings to establish collaboration projects and help dissemination of information, especially in the South Mediterranean.
Establish links with universities, local schools and literary NGOs, to increase and broaden literary events’ audiences beyond the usual urban demographic.
Include less widely used (“smaller”) language literatures in activities and place emphasis on multilingualism in the region as a cultural asset.
Visit each other’s festivals across the region, to strengthen links and exchange best practices.
Organise staff exchanges / internships between emerging and established festivals.
Focus on building up mobility funding.

Recommendations on literary translation in the Euro-Mediterranean region:
Address the difficulty publishers face in finding good literature from other languages to publish in translation, by forming a network of publishers who translate, and by producing relevant resources.
Establish a database of relevant publishers and translators.
Set up regular translation seminars and workshops, and follow up with concrete publishing projects.
Lobby funding bodies and publishers to increase translator visibility and status.
Address the issue of gate-keeping around information on authors, books, awarding residencies and bursaries for writers and translators.
Encourage better communication between funding bodies and applicants.
Invest in recruiting and training literary translators: requires connections at academic level and cooperation with universities – as LAF’s cooperation with Ain Shams (Cairo) and Bogazici (Istanbul) Universities.
Recruit and train more translators from less widely used languages.
Funding schemes need to be established in the south to support translation and mobility.
Establish a Euro-Mediterranean translation/literary exchange hub: physically located and with a virtual presence (an online platform). It would connect actors involved in the translation and publishing process – writers, publishers, translators – as well as provide information and coordinate activities and projects.
·
Towards a Euro-Mediterranean Translation Hub
Valetta’s successful bid to host the Capital of Culture 2018 includes a proposal to set up a Literature and Translation House in Malta, which, if adopted and implemented, could become a true Euro-Mediterranean translation hub located in the very centre of the region. The partners in Malta intend for relevant aspects of the LAF strategy recommendations to be integrated into their proposal.

Final strategy workshop in Valletta, 5-7 April 2013
The final stage of this consultation process will consist of the concluding meeting in Malta, which will bring together some 35 representatives of leading organisations and networks, from both the literary and the wider cultural and policy sector. The participants will be invited to consider the outcomes of the last three years’ discussions in the light of existing published research on cultural policy in the region, other relevant sets of recommendations, and the expertise of the specialists invited. The workshop will produce a final document and a set of recommendations which will be widely disseminated and presented to policy makers at national, regional and EU level.

Key areas for discussion in Valletta:
1) Literary policy as part of wider cultural policy.
2) The role of culture in EU external relations.
3) The role of independent organisations in the international cultural sphere.
4) Information resources.
5) Mobility.
6) Establishing a Euro-Mediterranean translation and literary exchange hub in Malta.