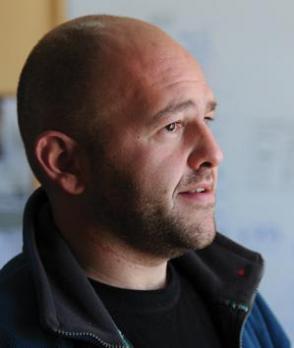 Karl Schembri (born in 1978) is a Maltese writer and journalist. A sociology graduate from the University of Malta, he has written two novels, Taħt il-Kappa tax-Xemx in 2002 and Il-manifest tal-killer in 2006. He is also the co-author of the anthology of poems Frekwenzi ta’ Spriti fis-Sakra (1997) and co-editor with fellow author Adrian Grima of Id-Demm Nieżel bħax-Xita (2009) – an anthology of poems in solidarity with Palestinians published during the 22-day war on Gaza. He has reported extensively from Libya, Kosovo, Albania, and the Occupied Palestinian Territories, and won the 2000 Malta press award for his reporting. He has also contributed to The Sunday Telegraph, Russian Newsweek and Guardian Weekly and is the founding chairman of The Journalists’ Committee. He is currently Media & Communications Officer at Oxfam GB in Gaza, Palestine.

Il-manifest tal-killer was censored by the University of Malta’s radio station, Campus FM, after the management learnt that it was going to be read in the literary programme series Wara Arrigo in January 2007. An adaptation by Bryan Muscat was staged in October 2008 by Lemonhead Productions. Fellow Maltese writer and critic Mario Azzopardi (born in 1944 in Ħamrun Malta) describes Schembri as ‘a pioneer in his generation that has assaulted his nation that is lubricated on hypocrisy, nepotism and corruption.’ He has read his poetry at various festivals in Malta, Lodève (France), Bali, and elsewhere. Collections of his poetry in Maltese and English are appearing in 2013.

Schembri is taking part in the 2013 Malta Mediterranean Literature Festival.