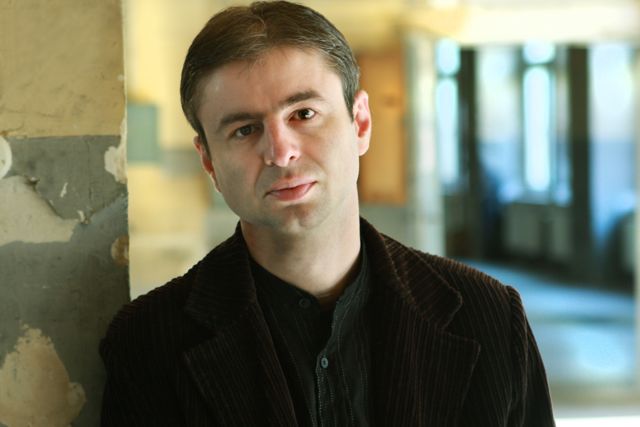 Nikola Madzirov is one of the most powerful voices of the new European poetry. He was born into a family of Balkan Wars refugees in 1973 in Strumica, Macedonia. His award-winning poetry has been translated into thirty languages and published in collections and anthologies in US, Europe, Latin America and Asia. In 2011 BOA Editions published a selection of his poetry in the US titled Remnants of Another Age. In the foreword, Carolyn Forché tells us, “Madzirov calls himself ‘an involuntary descendant of refugees,’ referring to his family’s flight from the Balkan Wars a century ago: his surname derives from mazir or majir, meaning ‘people without a home.’ The ideas of shelter and of homelessness, of nomadism, and spiritual transience serves as a palimpsest in these Remnants”—while Madzirov himself tells us in one of his poems, “History is the first border I have to cross.”

Nikola Madzirov received the Hubert Burda international poetry award for authors born in East Europe and many other domestic and international awards and grants as IWP at the Iowa University. American contemporary jazz composer and collaborator of Björk and Lou Reed, Oliver Lake, has composed music based on Madzirov’s poems.

Madzirov is taking part in the 2013 Malta Mediterranean Literature Festival.