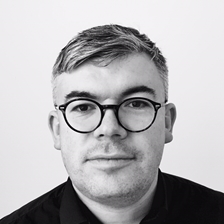 Dylan is a prolific commentator on the culture of Wales, leading policy work on media and democracy for the Institute of Welsh Affairs, for whom he has edited the welsh agenda magazine since 2014, and writing regularly for The National.

Dylan’s latest novel, Many Rivers to Cross (Three Impostors, 2021) was the recipient of a research grant from the Global Academy of Liberal Arts and won a Society of Authors Travelling Scholarship 2022.

His first book Driving Home Both Ways, a collection of travel essays, was published in 2018 – the same year Dylan was Hay Festival’s International Fellow.

Dylan Moore has founded and co-founded magazines including The Raconteur and the Wales Arts Review and his journalism has been published widely, including by theartsdesk, Daily Telegraph, Lonely Planet, Times Educational Supplement, and Vanity Fair. His cultural commentary has featured on BBC television, Radio 4 and Radio 1Xtra.

Dylan is a regular guest and presenter at Hay Festival, and has appeared at festivals in Wales, Spain, Hungary, India, Peru, Colombia and Mexico.

Dylan has worked to support refugees, as well as serving on the committee of Wales PEN Cymru, on behalf of whom he spoke in solidarity with threatened journalists at PEN Pregunta, Mexico City.

Dylan lives with his family in Cardiff.